Posted on September 6, 2013 by natronhealthcare 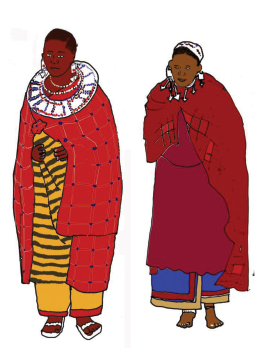 Educating communities about their own health is a cornerstone to our project – the foundation upon with individuals may not only make informed decision about their healthcare needs, but may realize their human and legal right to adequate care.

In 2009, when we first founded NHP, Penny felt that conventional health education materials relating to sexual health and HIV/AIDS awareness might not be relevant to the villagers in Makat and Wosiwosi (left). This conclusion was based on her experience in rural community health in India, Nepal and Tanzania

We realized immediately that there was a dearth of information and data from the medical profession about patterns of sexual relationships within Masai communities that might represent risky behavior. In addition, all the material on offer by other HIV/AIDS organisations depicted and was designed for Swahili or unspecified African people.

Taking these factors into account, as well as the trust built up through our personal relationships, we decided to adopt a ‘participatory open narrative’ approach to promoting awareness of the potential risk from HIV/AIDS.

The approach was based on the hypothesis that use of passive images, specifically of Maasai people, would motivate discussion (right) and the development of narratives by communities about relationships and practices that influence sexual health. Penny contacted Andrew Knight, a health educator and artist living in the UK. Together they created a set of images. 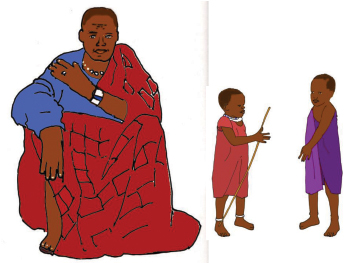 About the images. These ‘passive images’ were derived from photographs of individual people. Each image was anonymised to show one inactive character either standing or sitting. Facial expression was minimized. The images were reproduced in flat colour, outlined in with a fine black line, with no shading. Cutting the character out eliminated background information. For durability images were individually laminated.

We felt this modest effort to be a success, as Penny had positive feedback from several attendees, including Dr. Adelina Daniel. Dr. Swai has continued to use the cut-outs and interactive approach in workshops with communities, both on his own and working side-by-side with Penny.

Community health education workshops. For the past four years, we have focused on community discussion groups – our workshops. Andrew’s images are placed on a blanket or cloth in a way that involves the group, asking who characters might be, who they might be related to, what their lives might be like, etc. 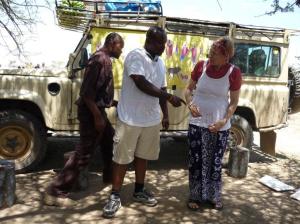 Through discussion about the lives of the characters the group is supported in the development of three narratives, one describing:

A second narrative that considers:

A third narrative that considers:

Facilitators also use the narratives to help the teaching in the project and learning by the leaders of the communities. We will always show the leaders the new material and ask their permission for the next set of “lessons”

Maybe we can make more blood?

The approach has been adapted and developed over the life Of the project.

Overall, we have met our original aims of stimulating open discussion and learning within communities and with our local health care partners.

These teaching sessions are well received. When we arrive in Makat and Wosiwosi, we get ever larger attendances to the teaching, despite the difficulties for the people to attend. We continue to mostly teach in separate women’s or men’s groups, but they increasingly will combine for some topics, and we have been doing more teaching in the school at Makat.

We usually ask if they remember the last teaching and, despite the long intervals, they are able to recall key messages.

Over five years, Penny comments that the audiences are more interactive, and the questions are very pertinent. (e.g When tying up a dog after a dog bite, to assess its rabies status: “Do we feed the dog?”, “What is the situation with wild animals for rabies infection?”

Another marker of success, we feel, is that in 2012 we were asked by the headmaster at Makat to repeat the sexual health module from the 2011 workshops for the older, leaving children (12-16 years); and when Penny asked “Do you want me to tell them about condoms?” He said “Yes, yes, everything as before.”

Feed back from communities also indicates that use of the passive images may have led to the development safer sexual health behavior by some community members.

DILL stands for Development through Life Long Learning, a not-for-profit community-based organisation that promotes informal approaches to learning and development, encouraging and enabling local communities to work in partnership with organisations that support cultural and social development.